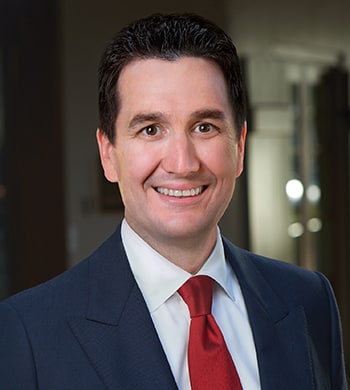 Blake R. David was raised in Lafayette and is a founding partner of Broussard & David, LLC. Mr. David focuses on personal injury and wrongful death litigation with an emphasis on offshore/maritime, trucking accident, aviation, products liability, industrial accident, and automobile claims. Mr. David is an "AV" rated attorney by Martindale-Hubble (highest rating possible). Mr. David is board certified by the National Board of Trial Advocacy in Civil Trial Advocacy and a member of the American Board of Trial Advocates (ABOTA).

From 2012-2020, Mr. David has been recognized by Louisiana Super Lawyers in the field of personal injury law, and by Million Dollar Advocates and Multi-Million Dollar Advocates Forums. In 2019, 2020 and 2021, he was included in Louisiana Super Lawyers list of TOP 50 lawyers in the state of Louisiana (this exclusive list of 50 named individuals is selected out of over 22,000 lawyers in Louisiana). Mr. David has been named to Top 1% of lawyers nationwide by National Association of Distinguished Counsel. He has also been recognized by The National Trial Lawyers as a Top 100 Trial Lawyers, an exclusive designation for trial lawyers who exemplify superior qualifications, trial results, and leadership.

In 2017, Mr. David was appointed to the Louisiana Board of Regents by Governor John Bel Edwards and confirmed by the Louisiana Senate (the secondary education board that coordinates the efforts of all 33 degree granting institutions in the State of Louisiana). He currently serves as Chair of the Board of Regents, and is head of the Executive Committee. Mr. David currently serves on several community organizations as well, including Lafayette Economic Development Authority (appointed by city-parish council to the LEDA Board of Commissioners), First Horizon Bank/IberiaBank (Advisory Board), Downtown Development Authority (past Board Member and Chair of DDA and DLU), Opus Christi Magnum Catholic Charities (Former Co-Chair, Captain); Our Lady of Fatima Catholic Church (Eucharistic Minister, Foundation Board, Finance Board), Community Foundation of Acadiana (Professional Advisors Committee), ABC Art Fund (Vice-Chair), The Acadiana Tigers (Board Member, Past President), and a founding board member of "the705”, a young professionals organization focused on leadership and service in the community.

In 2009, Mr. David was honored as the “Outstanding Young Lawyer of Louisiana” award by the Louisiana State Bar Association. This award is presented annually at the Louisiana State Bar Association’s Annual Meeting in Florida to one attorney under 40 years of age who has made outstanding contributions to the legal profession and his or her community. In 2006, The Daily Advertiser recognized Mr. David as "20 Under 40", an honor designating Mr. David as one of Acadiana's 20 most successful business persons under 40 years of age.

Prior to litigating, Mr. David graduated from LSU (BA, JD) and worked as a registered lobbyist with Haynie & Associates in Baton Rouge. He and his wife, Amber, reside in Lafayette with their three children.

Board Certified in Civil Trial Law, National Board of Trial Advocacy

Louisiana Board of Regents
Appointed by the Governor of Louisiana to serve on the state's highest ranking secondary education board coordinating the efforts of all 33 degree granting institutions in the State of Louisiana.
BOR Finance Committee Chairman
BOR Secretary
BOR Executive Committee